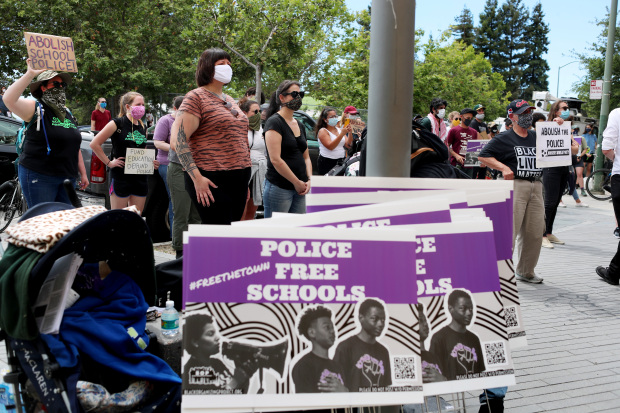 Youth Across the Country Petition School Boards to Reimagine Safety

June 22, 2020 -- Today, June 22, 2020, marks the beginning of a weeklong, nationwide call to support young people and their allies in the fight for police-free schools. This national week of action is being called by the National Campaign for Police-free Schools led by the Alliance for Educational Justice (AEJ) and Advancement Project National Office and supported by the Center for Popular Democracy, the Communities for Just Schools Fund, and the Funder’s Collaborative for Youth Organizing.

In the week ahead, communities across the country, mostly led by Black and youth of color organizers, are calling on their school boards, mayors, and other elected officials to cut ties with local police departments and remove police from schools. This follows the success of youth organizers and allies in making similar demands in Minneapolis, Seattle, Denver, Milwaukee, Portland, and Rochester over the course of the past two weeks alone.

Stay connected to the week of actions here.

“Black youth are organizing and demanding police-free schools because they know that the same police killing Black people in the streets are the same police assaulting and arresting them in their schools,” says Alliance for Educational Justice National Director, Jonathan Stith. “This is a national crisis. Until a few weeks ago, there wasn’t a school in America that a Black child could attend where there wasn’t the threat of police violence.”

In each of the following cities, youth will continue to build the necessary momentum to influence school boards who are on the brink of caving to the widespread calls to remove police from schools. National organizations are supporting the network of youth leaders this week to ensure similar successes in Philadelphia and Pittsburgh, Pa.; Madison, Wis.; Phoenix, Ariz.; Chicago, Ill.; Washington, DC; Oakland, Calif.; Salem, Ore.; New York City; and Las Vegas, Nev. Details on actions happening across the country can be found here.

For years, Black and Brown youth organizers have decried and campaigned against school policing and punitive school discipline policies which have perpetuated the systemic criminalization of Black and Brown youth at school. Since the #AssaultAtSpringValley in 2015, AEJ has documented over 140 incidents of police violence against mostly Black students in the We Came To Learn: A Call for Police Free Schools report. Before schools closed because of COVID-19, data shows that in the United States, at least once a week, a Black student was being assaulted by a school resource officer. The ongoing national uprising against the murders of Black people at the hands of the police, and against racialized police brutality in general, continues to build public pressure behind the call to defund the police. At the same time, the national campaign led by Black and Brown youth for police-free schools has gained momentum and public support across the country.

“The permanent presence of police in schools is such a clear example of systemic racism in this country. Youth of color in particular have for years been demanding their removal and an end to their criminalization. How can it be that more than 3 million students in the U.S. attend school with police officers, but can not count on having nurses on staff? That's not right. This week of action is an opportunity to support the youth of color fighting to end the violent and abusive system by demanding #PoliceFreeSchools,” added Dmitri Holtzman, Director of Education Justice Campaigns, the Center for Popular Democracy.

“Research and the experiences of young people of color have taught us that police in schools create a toxic school climate and fuel the school-to-prison pipeline. #PoliceFreeSchools are essential to the well-being of our Black and Brown youth,” said Judith Browne Dianis, Executive Director of Advancement Project National Office. “As a national civil rights organization that has worked on education justice issues for over a decade, we will continue to support parents, students and educators in campaigns to eliminate racial discipline disparities and dismantle institutional racism within the nation’s public schools. This national week of action is big, bold, and gets us closer to re-imagining justice for our young people of color.”