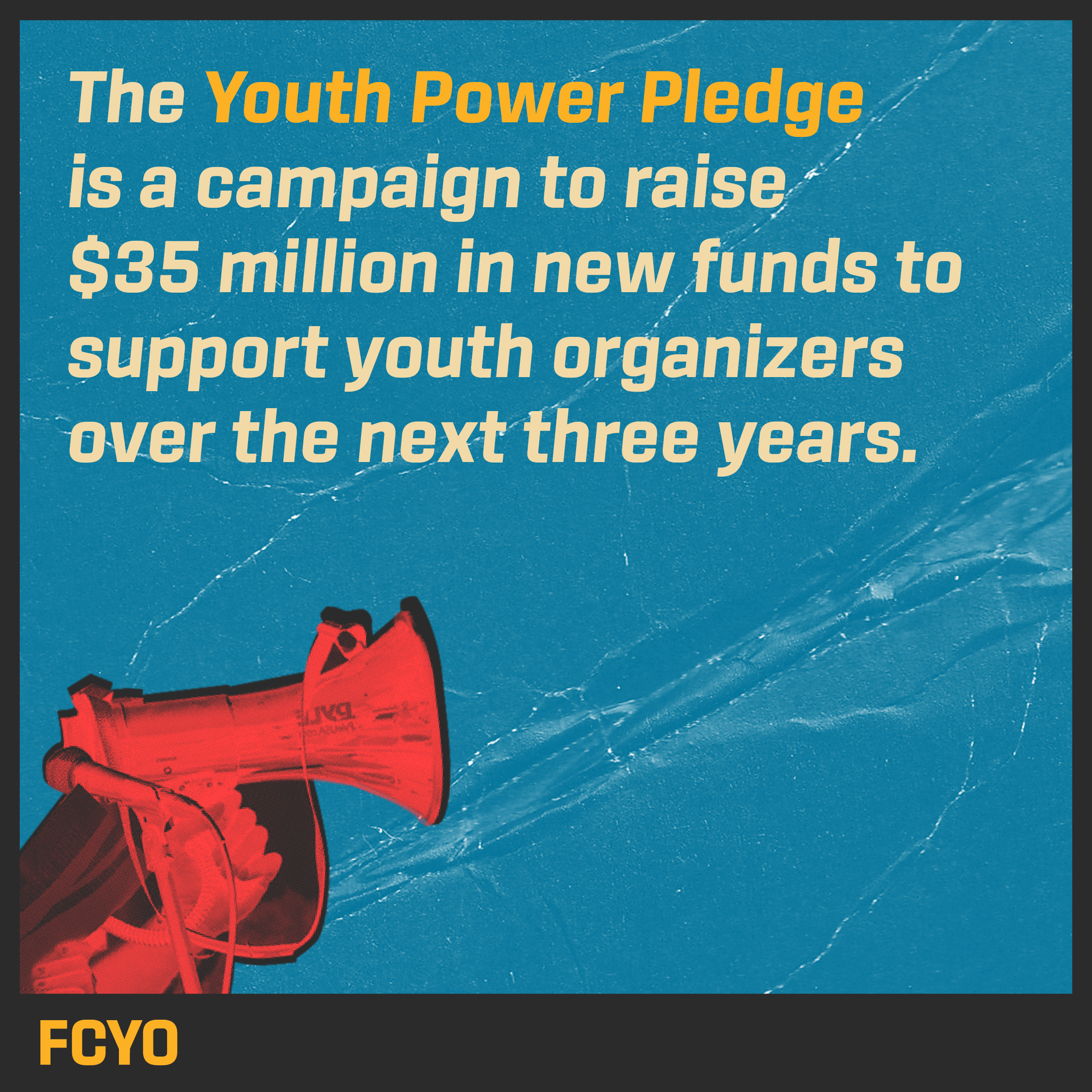 NEW YORK — The national nonprofit organization The Funders’ Collaborative on Youth Organizing (FCYO) announced today the launch of the “Youth Power Pledge,” a fundraising campaign to mobilize $35 million in new resources for the youth organizing field over the next three years.

Grounded in racial, gender, and economic justice, youth organizing is the process of engaging young people of color in building power for systemic change while supporting their individual and collective development. Over the past few years, youth organizing has driven extraordinary changes across the country, securing wins in racial justice, policing reform, reproductive justice, immigration, education, climate, and more. The Youth Power Pledge is an opportunity to further resource the strength of youth organizing and ensure the sustainability of the field at a watershed moment in time.

“It’s time we recognize, resource, and amplify the power of young organizers,” says Mónica Cόrdova, Executive Co-Director of FCYO. Cόrdova explains: “In the past year alone, youth organizers won key victories toward ending the school-to-prison pipeline, mobilized record voter turnout in a contentious election year, and played a leading role in confronting the gross inequities in public health, education, and the economy that were only further exacerbated by the COVID-19 pandemic. Their work builds on the decades of youth-led social change seen in the Civil Rights Movement, Chicano Movement, the fight for queer and trans justice, and the American Indian Movement. But in today’s environment, this work simply can’t be sustained without more resources and support.”

As current events underscore the importance of systemic change, additional investments in youth organizing represent a tremendous opportunity for funders seeking to make an impact. Funders who take the Youth Power Pledge will commit to dedicating a portion of their resources to those youth organizing groups at the helm of social change.

“Youth organizing not only creates system changes that can transform communities,” said Eric Braxton, Executive Co-Director of FCYO, “but is also one of the best ways to support young people’s development and nurture the young leaders of today and tomorrow. Yet only a tiny fraction of the funding going to youth programs goes to engaging young people in organizing.”

According to the FCYO’s 2020 Funder’s Scan, while the youth organizing field receives $200 million in annual support, this is just a drop in the bucket compared to philanthropic support for closely aligned areas such as youth development ($1.8 billion in 2017) or civic engagement ($460 million in 2017).

“The Youth Power Pledge is a critical resource to provide youth of all backgrounds with the tools, time, and trust to lead,” said Darren Walker, president of the Ford Foundation. “We have committed more than $1.5 million to the pledge and urge other funders to support the leaders who are advancing justice and equality at this pivotal moment in history.”

The Funders Collaborative on Youth Organizing brings funders and youth organizers together to ensure that young people have the resources, capacities, and infrastructure they need to organize for a more just and democratic society. Over the last twenty years, we have helped to build a strong and vibrant youth organizing field across the United States. We have deep relationships with both youth organizing groups and philanthropy, the capacity to move resources to grassroots groups across the country, and the ability to help groups connect and build the capacities needed to address the challenges of this moment.